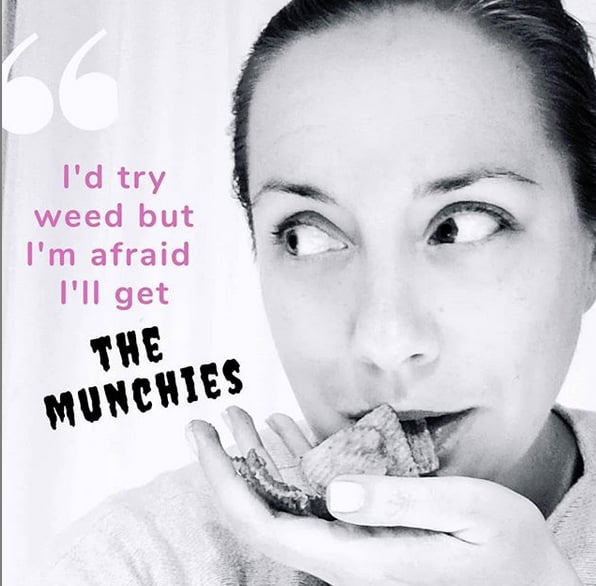 The dreaded munchies. THC stimulates the appetite, this is well documented, however it doesn’t have to be a problem.

Wine is worse than weed for calorie consumption

The main reason why so many of my wine drinking mom friends don’t want to try cannabis, is they don’t want to get the munchies.
Thing is, wine is around 300 calories a glass and that can add up fast.  Wine also stimulates the appetite. I get way worse munchies after drinking wine than I do with weed. When you add up the calories from your glasses of wine plus whatever snack food you eat as well, it can be a lot of extra calories.

There’s nothing to fear about the munchies with cannabis, this is more of an exaggeration than the truth. Yes you can get the munchies but it’s easily controlled.

Here’s 5 ways you can control the munchies from cannabis:

1-THCV ( tetrahydrocannabivarin) also known as varin, is a cannabinoid that suppresses the appetite. But it’s hard to find strains high in THCV. They are working on breeding higher THCV strains in places like Colorado, so that’s something to watch for in the future.

2- CBD taken with THC. Another way to combat it is through CBD, taken as a 1:1 or higher, it will help reduce cravings. Usually higher CBD strains are also lower in THC, which also helps reduce cravings.

3- Eat proper meals. Eating proper meals in the day helps, if you’re relatively full and satisfied you won’t feel the munchies as strongly as when you just ate off you’re child’s plate all day. I’m afraid those PB&J crusts you sustained yourself with all day will only leave you ravenous at night.

4- Keep low calorie snack foods around to munch on. Good thing with cannabis is everything tastes better, so you can enjoy a fruit salad and all its bursting flavors like you could a handful of candy.

5- Most importantly, it’s the Strain that matters. Some strains will stimulate your appetite more than others. Write down the strains you try that don’t give you the munchies and stick to those or strains with a similar profile. The profile being the percentages of THC, CBD and other cannabinoids if listed, also the terpenes. Terpenes can also play a role in stimulating the appetite.

Bonus tip: Brushing your teeth early on helps too as does sucking on a mint.