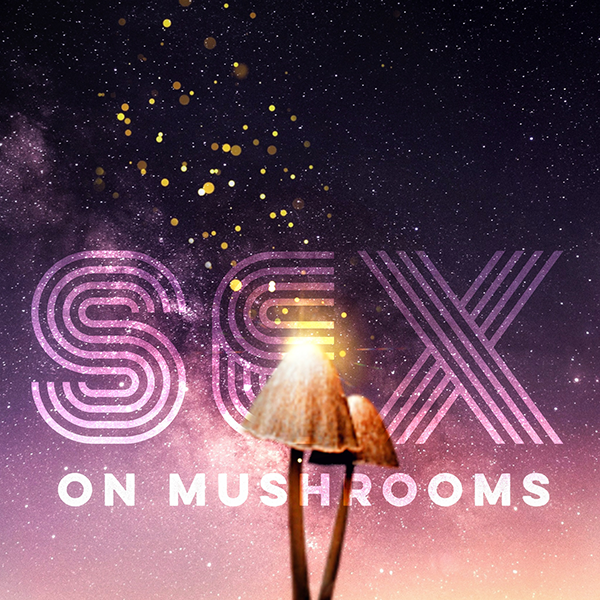 I’ve kept a container of psilocybin (aka magic mushrooms) infused chocolates hidden in my freezer for months. I’ve been waiting for the right moment to try them. The last time I did mushrooms was in my 20s, my husband (my boyfriend at the time) and I took the bus to the Bloedel Gardens in Vancouver. We stuffed a bunch of mushrooms in a slurpee and waited, I think we did 2 or 3 grams. At first I enjoyed the pleasant feeling, the flowers vibrating with colours and the grass rippling in the breeze but it quickly turned into a bad trip. I distinctly remember on the bus ride home, freaking out, thinking the guy’s long hair draped over the seat in front of me was growing and was going to attack me. Ya, I did a bit too much.

We haven’t done mushrooms since, however recently, with the popularity of psilocybin and scientific studies proving its benefits, I decided to give them another go.

Prior studies have found that that getting high on psilocybin doesn’t just create a colorful, psychedelic experience for a couple of hours; it can cause neurological changes that last over a year. These changes resulted in a personality that was more open to the creative arts and became happier, even 14 months after receiving the psilocybin.

How magic mushrooms change your brain

I’ve been reading numerous studies about the positive effects psychedelics has on depression and PTSD and I wanted to try microdosing them. Basically that means taking a very small amount, I wanted to see for myself what the fuss was about. My husband said we should try it, afterall we’re in this weird pandemic, quarantine uncertainty and feeling like hamsters living in a habitrail so we both thought, what the hell, let’s give psychedelics a try.

Down the rabbit hole we go…

Eating mushrooms is similar to cannabis edibles in that it can take anywhere from 1/2 hour to 2 hours to kick in, so we took them about an hour before we put our kids to bed. My dose was an 1/8th of a gram and my husband took 1/4 gram.

After about an hour and a half they kicked in hard and fast. In a similar way to eating THC, right when they fully kick in it can cause anxiety and make you feel uncomfortable as you adjust to the sensation. For the mushrooms it took about half an hour for me to get past the discomfort. My husband on the other hand, was feeling very nauseous and for him the nausea lasted for a few hours until he used a bit of cannabis and we had sex (I’ll get to that).

For me the initial side effects of the mushrooms caused a headache, dizziness (we both felt dizzy) and anxiety. The anxiety and headache wore off after a few hours however I still felt a little dizzy most of the evening. Probably being highly stressed and sleep deprived added to that side effect.

I can tell you this; they call it a trip for a reason. You go on a journey and you need to be prepared for that. While mine was mild as I took a low dose, it was enough that I was awake until 3am, as was my husband. You feel buzzed, it’s an energetic feeling but also a bit jittery. However after about two and a half hours, I started to feel really peaceful. I took a walk around my neighborhood and then came home to have herbal tea and watched one of those meditative youtube videos set to nature photography and I felt quite peaceful.

The sex was amazing

Now this is where the real magic happens! I’ve never had sex on psychedelics before and wow have I been missing out! First of all, my whole body felt tingly, having suffered from a lot of joint and muscle pain recently from anxiety, this tingly feeling was magnificent. It felt absolutely amazing and both of us agreed, we could’ve had sex for hours. Being exhausted parents who have to get up in the morning, we didn’t go on for hours but we did go longer than we normally do. It definitely enhanced sex by quite a bit. It made the whole sexual experience deeper, more meaningful and energetic.

I felt removed from some part of myself and having sex felt like I was a character in a really fun, mystical game however at the same time, I felt more deeply connected to my husband. Like some of the bullshit we’ve accumulated over the many years from being together so long just disappeared *poof* like magic and I was content to just be with him in that moment.

Having sex cured my husband of the nausea as did a little bit of cannabis. Doing cannabis while on mushrooms enhances the trip, however do so with caution. He did it to help with his nausea however it made him pretty high. I avoided cannabis, I didn’t even want it the next day, I felt really good.

Something shifted internally, I felt some part of me was more peaceful, corrected and some of my pain was gone. I felt a slight shift in my awareness, meaning things looked a little different the next day, I had a headache from lack of sleep but I also felt better. The best way I can describe it is like a cleansing of sorts, like the mushrooms cleaned away some internal grime and I felt happier, more at peace.

If you have kids, I recommend doing mushrooms during the day when your kids aren’t at home or while you’re on vacation so you can just be on your journey in peace. I definitely recommend having sex and being in nature, somewhere peaceful. I found that 1/8 of a gram, 125mg was the perfect amount for me.

I’ll be doing mushrooms again and if you want to try them yourself, you’ll have to look around for them as they aren’t legal to buy just yet. You can legally grow them yourself in Canada, however if you have a medical condition such as depression or anxiety, you can buy them from the medical mushroom dispensary in Vancouver, B.C.

Read about sex on edibles, for more ways to spice things up in the bedroom