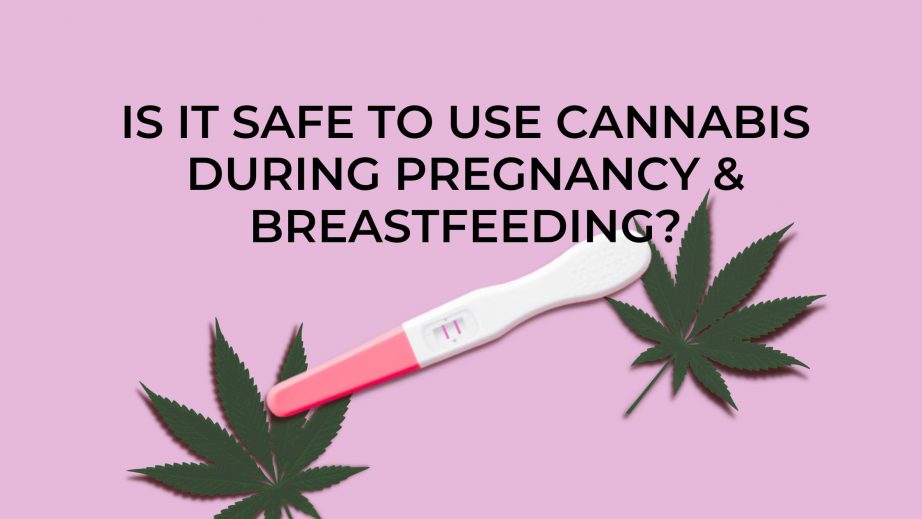 The number one question I’m asked as a cannabis educator is if it’s safe to use cannabis during pregnancy and breastfeeding. The truth is there’s not enough data yet to know if it’s 100% safe and every single resource you read online will tell you it’s best to avoid it, same with breastfeeding.

From my own research, and from listening to the anecdotal evidence from many moms in the cannabis community, I can say the short answer is no and that it’s probably best to avoid it and the long answer is maybe.

Is it safe to use cannabis during pregnancy?

With all science around cannabis, you’ll find some studies saying it’s bad for this or that thing and another study contradicting it will say it’s good or harmless for that thing. What I look for is a consensus from different studies and long-term studies that have been peer reviewed.

One such study around cannabis and pregnancy came out recently that looked at cannabis and the cognitive effects from the use of cannabis during pregnancy- the results showed it had no effect on brain health.

After nearly six years of comparing study results, researchers at Columbia University, the New York State Psychiatric Institute, and Swinburne University have found that prenatal cannabis exposure does not lead to cognitive impairment in children, based on data from decades’ worth of studies on this issue.

However, you’ll find some resources that say it does cause cognitive impairment so what do you believe? I find the same thing is true for any prescription drugs they give you during pregnancy, they may think it’s safe now until further studies discover that oopsie, turns out this prescription we gave you is not safe after all.

When it comes to pregnancy there’s many factors and variables that come into play that can affect the development of your baby. Nutrition, genetics, environmental factors like pollution, the health of the mother, stress, if she’s well supported by her community and healthcare providers.

All these things matter for a healthy pregnancy. Certain things like feeling supported, stress and the wellbeing of the mother can be overlooked by some healthcare providers as they follow strict protocols and take a hardline approach.

A big problem women face during pregnancy is in some places she can get a knock on her door from child protective services if she tests positive for THC while pregnant. This fear means more women are keeping quiet about their cannabis use and hiding from healthcare providers. This leaves a big gap in their overall healthcare, and this isn’t right.

Women should be able to speak to their doctors about what they’re consuming without worrying they’ll be treated like a criminal, and in some places face prosecution from using cannabis during pregnancy.

Can cannabis be used in pregnancy to deal with difficult to treat health conditions like hyperemesis?

So far the studies around cannabis use during pregnancy are very mixed, and it’s difficult to say if cannabis is safe for pregnancy. However there’s certain variables that come up that may make a woman turn to cannabis to offer relief during pregnancy.

Hyperemesis can be a serious condition for pregnant women that causes extreme nausea and vomiting to the point where they can lose weight and need hospitalization. The drugs used to treat women with this condition can have unpleasant side effects.

One woman I spoke to who used cannabis during her pregnancy said the drug they prescribed her for extreme nausea made her feel dopey and she couldn’t function. She decided to use a bit of cannabis instead and said it worked much better without the side effects.

Amy Schumer was very open about dealing with this debilitation condition during her pregnancy and using cannabis to help deal with extreme vomiting.

More pregnant women are choosing to use cannabis to treat conditions like hyperemesis when everything else they try doesn’t work. Some women use cannabis to help them with severe anxiety and depression that can get worse during pregnancy, especially because several medications that treat these mental health conditions aren’t safe for pregnancy.

Some cannabis advocates reference an old study about cannabis use during pregnancy.

Some people in the cannabis community go by an old study from Jamaica by Melanie Dreher, a registered nurse and graduate student in anthropology. The study included 24 newborns who were exposed to cannabis prenatally and 20 infants who had no exposure. Dreher found positive results from the babies who were exposed to cannabis, they were less irritable and had better reflexes than the babies who weren’t exposed.

“In another paper published in 1988, Dreher and coauthors wrote, “Caution should be taken in making generalizations to other cultures where characteristics of marijuana users may not be similar.”

One study from over 30 years ago doesn’t give us a good look at how THC can affect a developing brain and other organs in the womb. The problem with THC is that it’s fat soluble and can pass through the placenta to the baby. What this does to the baby long term, we simply don’t know yet.

The answer to the question of whether or not it’s safe to use cannabis during pregnancy is that more research is needed.

My final thoughts on using cannabis while pregnant

When I was pregnant with my second child I had so many bad opinions thrown my way by my healthcare professionals.

I was very stressed out, overwhelmed, and scared as I had to spend every week at the end of my pregnancy in the hospital, hooked up to machines to monitor the baby.

I had gestational hypertension and I remember a team of doctors at the hospital during one of these visits, giving me a huge guilt trip about taking blood pressure medication. I caved in and took the meds even though after I started taking the meds my OBGYN told me that I didn’t really need to take it and guess what, it didn’t work anyway, I still had high blood pressure.

I was advised by my OBGYN to go for a vaginal birth, even though I asked for a c-section because my first birth was so difficult and I also had high blood pressure for that pregnancy too. I was 40 yrs old at the time and I knew another vaginal birth might be dangerous for me.

I chose to listen to my OBGYN and nearly died and lost my baby because of it when I suffered from a placenta abruption while they tried to induce labor. I ended up having an emergency c-section under general anesthetic and missed the birth of my baby and spent six months recovering while caring for a newborn and a 3 year old.

This was one of the darkest times of my life but it taught me to be a better advocate for myself.

I know in my gut that had I had a scheduled c-section, had I used a low dose of cannabis to relax and lower my blood pressure instead of the cocktail of drugs I was on, I would have been way better off.

I’m not a doctor, nor am I a scientist and so I won’t recommend you use cannabis while pregnant. I will however tell you that you’re your own best advocate, you do need to listen to the experts but you also need to do what’s right for you.

Is it safe to use cannabis during breastfeeding?

Again, not a lot of research to say one way or another and every website on the subject will tell you to avoid cannabis during breastfeeding.

However recently Maya Elisabeth, a mom who owns her own cannabis company called OM Living and Om Wellness decided to have her breastmilk tested to see if it contained any cannabinoids. She uses cannabis daily and was concerned her baby may be getting THC through her breastmilk.

“I was a couple of months postpartum, and I had the opportunity to be a judge in a competition where I ended up inhaling a lot of organic cannabis at a super low temperature,” she says. “My [partner] had raised concern with me that ‘Hey, I’m nervous that your breast milk might be getting the baby high.’ I did all this research because I was like, ‘Oh shoot, am I getting the baby high? I was super nervous. I also felt defensive and scared.”

Maya decided to have her breast milk tested in the lab to see if there was any cannabinoids present in the milk, there wasn’t any detected.

A recent study saw no effect on the baby from women who breastfed while using cannabis.

“The study examined records from 763 preterm infants from 2014 to 2020, where researchers noted that 17 percent of the birthers had tested positive for THC in their system during delivery. But when researchers compared preterm infants who were chestfed THC-positive human milk to infants who were formula-fed or chestfed milk with no THC present, they found no difference in breathing difficulty, lung development, or feeding issues”

After the birth of my daughter a midwife suggested I drink Guinness beer as it was thought to promote the production of breastmilk.  She told me only an infinitesimal amount gets through, and that it was safe.

While in the hospital after having my son I was on several medications, including morphine and they insisted I try to breastfeed. I asked if it was safe to breastfeed and they said yes, it’s fine.

This is the problem many women face when trying to find good information about what’s safe to consume while pregnant, you get mixed messages and every doctor has a different opinion.

My thoughts on using cannabis while breastfeeding

From the research I’ve done on breastfeeding and using cannabis, most healthcare providers urge you to avoid cannabis while breastfeeding while others say it’s ok in small amounts.

My advice for those of you that do choose to use cannabis while breastfeeding- avoid smoking cannabis and instead use a dry herb vaporizer on a low setting. Use low dose products and use cannabis sparingly.

Moms just want to know if what they’re doing will harm their baby. You’re your own best advocate, do your own research to come to your own conclusion. I can provide you with the information I have but when it comes to pregnancy and breast feeding, there’s no straight answer, only that it’s recommended to avoid using cannabis while pregnant until more research is available.